By Scott Nicol
The U.S. half of the International Boundary and Water Commission (IBWC) has finally caved under pressure from Customs and Border Protection (CBP) and approved border walls in the Rio Grande floodplain adjacent to Roma, Rio Grande City, and Los Ebanos. 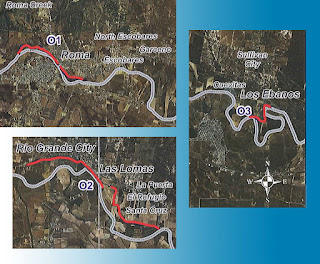 These three border wall sections, totaling 14 miles, were not built when other parts of the Rio Grande Valley were walled off because of the serious danger they pose to communities on both sides of the river.  On the U.S. side they could block the exit of flood water into the Rio Grande, bottling it up in towns and farm land and exacerbating the damage that they suffer.


They could also deflect flood waters towards Mexico, worsening flooding in Mexican communities.  Deflection might even cause the river to settle into a new channel farther to the south, which would effectively change the location of the border.

In an attempt to lessen the amount of water that these walls will deflect into Mexican cities CBP designed them to channel flood waters north into the U.S. cities that they abut.  The walls will begin close to the Rio Grande, where during a flood water would be split off from the main channel.  As the river bends the mostly straight walls get farther from them, meaning that floodwater, along with all of the debris and garbage it carries, will be channeled into properties in the United States that might otherwise be spared from flooding.


To make certain that water is channeled into the U.S. holes were planned for the middle of two of these wall sections – a 100 foot wide gap in the Roma wall, and a 275 foot wide gap in the Rio Grande City wall – explicitly intended to direct more water into these communities during a flood. 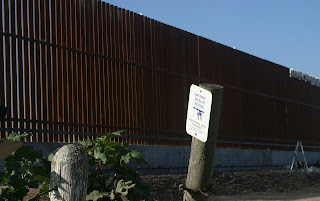 
All three of the new border wall sections would also slice through the Lower Rio Grande Valley National Wildlife Refuge.  Established to create a wildlife corridor along the Rio Grande, the refuge provides habitat for critically endangered ocelot and jaguarundi.  Walls that have already been erected downriver repeatedly bisect and fragment the refuge, putting the future of the terrestrial species that it harbors in doubt.  The new walls would further fragment the refuge and cut off animals from the only reliable source of water in what US Fish and Wildlife has described as “some of the best habitat(s) in the U.S. along the final portion of the Rio Grande.”


In a February 15, 2012 letter John Merino, Principal Engineer for the US section of the International Boundary and Water Commission gave CBP the green light, saying, “the USIBWC has no objection to the erection of the fence segments within the limits of the Rio Grande floodplain.”  Merino dismissed the possibility that walls would deflect or obstruct flood waters, and stated flatly that USIBWC did not examine potential environmental impacts.  He also failed to mention the fact that for the previous five years both the U.S. and Mexican halves of the bi-national International Boundary and Water Commission had rejected the idea of placing border walls in the floodplain.


Throughout 2007 and 2008 CBP tried without success to come up with a wall design for these last three sections that would not impact flooding, and that the IBWC would therefore approve.  Unable to convince the IBWC that walls in the floodplain would not act like dams, a DHS briefing from October 2, 2008, said of these three, “DHS likely to drop fence segments.”  When CBP informed Representative Henry Cuellar a few days after the 2008 election that these border wall sections were “on hold,” Cuellar called it “a big victory” for his district.


It would have made sense for Customs and Border Protection to decide that the Roma, Rio Grande City, and Los Ebanos walls were not worth risking lives and property to build.  Or, if bureaucracy outweighed humanity in their thinking, they might have called off wall construction in order to comply with the international treaty.


They also could have based a decision to spare them on a June 2008 internal Customs and Border Protection document that stated that “The Rio Grande Valley Sector Chief has determined that operational areas that contain the PF225 fence segments such as O-1 to O-2, O-12 through O-14, and O-17 through O-21 to be in “effectively controlled” level at the current time.”  Segments O-1 and O-2 are the Roma and Rio Grande City walls.


Segments O-12 through O-14 are in Cameron County, near Los Indios.  Segments O-17 through O-21 encompass all of the wall sections in the vicinity of Brownsville, from the neighborhoods near the River Bend Golf Course west of town past the Sabal Palms Audubon Sanctuary and the Loop family orchard to the east.  Those who live in these areas and had their property condemned for border walls lost their land for nothing, because the local Border Patrol had determined that the area already under effective control before any walls were built. 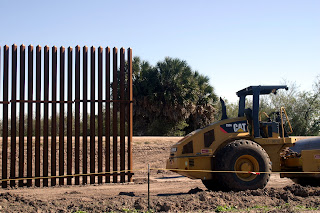 Of course decisions about who will get walls and who will be spared are made in Washington DC, not the Rio Grande Valley.


That simple fact helps to explain why Customs and Border Protection continued to push for these walls, shifting tactics from trying to convince Mexico that walls would not worsen flooding south of the border to pushing the US section of IBWC to allow for “unilateral” action – building walls in the face of Mexican objections, and thereby violating the international treaty.


After hurricane Alex roared into the Rio Grande Valley in 2010, followed by a tropical depression, the flooding Rio Grande forced the mandatory evacuation of Los Ebanos and parts of Rio Grande City.  With homes underwater and the evacuation order still in place, CBP hosted a meeting for the USIBWC and the State Department in Washington DC.


At the DC meeting Customs and Border Protection did not mention the ongoing floods that were inundating the sites of the proposed walls, or the Border Patrol sector chief’s assessment that the area was “effectively controlled.”  Instead, CBP said that the three remaining walls were “critical to our Nation’s security,” and since Mexico continued to insist that they posed a flood hazard “we need [US]IBWC and Department of State’s support for an unilateral decision to proceed with the fence construction.”


Throughout 2010 USIBWC consistently rejected unilateral action, pointing out the likelihood of “substantial increases in water surface elevations and deflections of flow at several points of all three projects.”


But in late 2011 USIBWC reversed itself.  John Merino, the US section’s Principal Engineer, wrote to his Mexican counterpart to say that US IBWC had “concluded that the project will not cause significant deflection or obstruction of the normal or flood flows of the Rio Grande.”


The Mexican section of the IBWC responded in December of 2011, saying,


"...the location, alignment and design of the proposed fence represent a clear obstruction of the Rio Grande hydraulic area, since in the towns of Rio Grande City and Roma, TX, the fence would occupy nearly all of the hydraulic area on the U.S. side, causing the deflection of flows towards the Mexican side. If you consider that, given the design characteristics, the fence obstructs 60-70% of the hydraulic area in a direction perpendicular to the flow, and if you add to that the effect of the current retaining trash and debris, the significant length that is located in the floodplain, and the position of the fence relative to the direction of flow, the fence constitutes a serious obstruction and deflection of the Rio Grande flows towards Mexico. […] We reiterate our opposition to the construction of the proposed fence in the Rio Grande floodplain given the impacts stated above."


Because the IBWC is a bi-national body, the rejection of one party should have brought this project to a halt.  Instead the US half of the IBWC approved the walls, allowing Customs and Border Protection to undertake the unilateral action that it had been pushing for.  This is a clear violation of the treaty that created both the IBWC and the border that Customs and Border Protection is supposed to protect.


But a treaty is just paper.  The real harm will come after the walls go up, when the next big storm roars into the Rio Grande Valley and the river floods.
Posted by NO BORDER WALL at 9:00 AM No comments: