Bulldozers are already clearing vegetation to build the seven mile long section of border wall on either side of the Sasabe, Arizona port of entry (see below). The Department of Homeland Security prepared an Environmental Assessment (not to be confused with the more stringent and comprehensive Environmental Impact Statement that should be completed for a project in sensitive habitat) which, not surprisingly, found that construction of the wall would have “no significant impact.” To date Secretary Chertoff has not issued a Real ID waiver of environmental laws, so DHS cannot legally ignore the Endangered Species Act, the National Environmental Policy Act, and other relevant statutes. 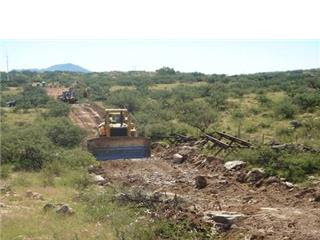 Part of the Sasabe border wall will be built on the southern edge of the Buenos Aires National Wildlife Refuge. The Refuge is currently working to determine whether or not a 15 foot tall steel wall is compatible with its mission, and has opened a brief public comment period. It is important that anyone who is concerned about the environmental impacts that the border wall will have take advantage of this opportunity and write a letter.

According to the draft Compatibility Determination,

The Refuge was established on August 1, 1985 “....to conserve (A) fish or wildlife which are listed as endangered species or threatened species .... or (B) plants ....” 16 U.S.C. 1534 (Endangered Species Act of 1973) and for the “...development, advancement, management, conservation, and protection of fish and wildlife resources....” 16 U.S.C. 742f(a)(4) (Fish and Wildlife Act of 1956). Congressional records and other pertinent files show that conservation of the masked bobwhite quail was the major impetus behind establishment of the Buenos Aires NWR. Habitat restoration and the existence of a self-sustaining population of masked bobwhite quail remains a primary goal of the Refuge.

In total this portion of the border wall will clear 51 acres of habitat, and will be an impassible barrier for large terrestrial animals such as pronghorn and jaguar. In the last few years jaguar have been photographed in southern Arizona, giving hope that they may be able to move back into their former U.S. range. While according to the Border Patrol a border wall will only slow a human crosser by 5 minutes, a jaguar will find it impossible to climb over a 15 foot high steel wall. 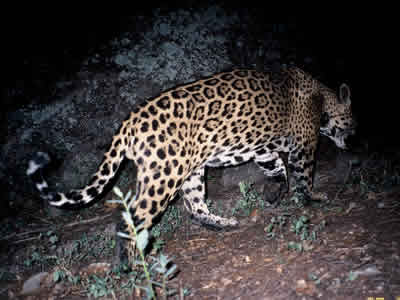 Unfortunately, the draft Compatibility Determination finds construction of the wall to be compatible with the refuge’s mission. In many places it simply repeats assertions from the Environmental Assessment. These include the statement that “Jaguars will still be able to move through other areas of the border,” which conveniently ignores the fact that most of the Arizona border will be walled off, not just the Buenos Aires National Wildlife Refuge. It is important that this flawed argument be pointed out in public comments, along with the basic incompatibility of a wall in a wildlife refuge. The Compatibility Determination and the Environmental Assessment that it is based upon focus narrowly on the footprint of the wall, ignoring the fragmentation of habitat that extends beyond the refuge’s borders. The refuge is not an island, it is a portion of a larger ecosystem, and the ability of animals to travel through that ecosystem is vital to its continued viability.

The public comment period on the Buenos Aires National Refuge’s draft Compatibility Determination closes on September 18. It is crucial that we all take advantage of the opportunity to comment on its inadequacies and flawed determination. Comments must be sent to:

The border wall will be the death knell of the jaguar (and other species) in the US. What a bad, bad idea!

Birds can fly over the wall and jaguars can dig under...Find a better excuse for your extreme socialist views. What is wrong with keeping ILLEGAL PEOPLE out of your own country? Do you have a fence surrounding your property? Do you lock your doors at night? WHY? Exactly, you want to keep criminals from stealing YOUR things or causing harm to you and yours. Get over it!!!

Is there an Internet site where the BANWR Compatibility Determination is available?

I have a copy, but it is 10 pages -- too long to post here. Send an email to noborderwall@yahoo.com and ask me for it, and I can pass it along to you. It is a really weak document. It frequently quotes from Border Patrol documents, rather than using USFW biologists and other experts to actually research the impacts of the wall. It also looks only at the short span that will actually go through the refuge, rather than the entire span that the Secure Fence Act calls for. That leads to the conclusion that a jaguar can easily get around the fence, ignoring the fact that when it is all built they will have to travel 100 miles in one direction or nearly 200 miles in the other to go around it.

Thank you for your reply, which was an unexpected, pleasant surprise. One person I spoke with at the refuge during a telecon said the CD was a very sensitive subject and that I must speak with the refuge manager to get any information. Last week I requested a copy of the CD through a voice mail message I left and then I sent a follow-up e-mail. I have not received a reply. I am a former federal employee. I know CDs are public documents that are often posted as a .pdf on a refuge website and I find the lack of disclosure surrounding the stealthy CD a legitimate cause for concern. I do not know how far along the BANWR/Sasabe section of the wall construction has progressed, but I want to see it stopped and/or removed. The San Pedro section of the wall/fence is a far worse ecological disaster.

I am a strong opponent of the United States’ immigration policy and as such, I am very anti-illegal immigration. I want severe penalties for the illegal entrants and a repeal of NAFT. However, the Great Wall of Mexico illustrates the utmost example of asininity characteristic of bureaucratic ineptness.

I will send you an e-mail for a copy of the CD and I will share it with others. Thank you and your colleagues for this excellent, informative website and once again for your reply and your help.