The No Border Wall Coalition strongly endorses the Border People’s March to Stop the Wall, currently underway on the Texas – Mexico border. Marchers will follow the route of the 57-mile segment of border wall that is being built from Ft. Hancock, Texas, to El Paso, Texas. Led by No Wall – Big Bend and the Border Ambassadors, they plan to highlight the tremendous human and environmental costs of the wall in west Texas and along the entire U.S. – Mexico border.

Marchers will set off from Fort Hancock today, and arrive in El Paso on Sunday, August 31. More information about the march and its route is available at the Border Ambassadors website - www.borderambassadors.com .

Of special concern along the marchers’ route is the impact of the border wall on Native American communities. Like the Tohono O’Odham farther west, the lands that the Ysleta del Sur Pueblo of the Tigua Nation calls home lie on both sides of what is now the international border. The Rio Grande is crucial not only for providing water in a harsh, dry environment, it is also integral to their religious practices. As the Rio Grande is walled off, the Tiguas have stated that they will be cut off from graves and sacred sites.

The Tiguas are party to a challenge to the constitutionality of the Real ID Act’s waiver provision, alleging that giving an unelected administration appointee the power to waive laws passed by Congress and signed by the President for the express purpose of subverting the judiciary is a violation of the separation of powers enshrined in the U.S. Constitution. They are joined by El Paso County, the El Paso County Water Improvement District No. 1, the Hudspeth County Conservation and Reclamation District No. 1, Galeria 409, The Frontera Audubon Society, the Friends of the Wildlife Corridor, and the Friends of Laguna Atascosa National Wildlife Refuge. The wide spectrum of plaintiffs challenging the Department of Homeland Security’s suspension of laws points to the broad range of negative impacts that the wall will have in Texas, as well as the rest of our nation’s borderlands.

The same river that provides a focal point for the Tiguas’ religious ceremonies is equally important for the survival of plant, animal, and human communities. The Rio Bosque Wetlands Park has also spoken out against the wall, stating that, “A fence would limit the ability of native terrestrial species to move between such areas and the floodway. It would limit genetic exchange and would fragment populations that are currently connected.” As habitat is fragmented and access to the river is denied, animals, particularly those that are listed as federally threatened or endangered, may not survive.

With border wall construction currently under way near El Paso and elsewhere, it is critically important that we remind members of Congress that the elections that they are currently obsessed with are just the entrance exam for their jobs. Elections are meant to bring in public servants, and it is their job to serve the best interests of the American people. Building walls that will cut off the Rio Grande, that will disrupt Native American religious practices and disturb graves, that will destroy natural areas such as the Rio Bosque Wetlands Park, and will cost U.S. taxpayers billions of dollars, is unconscionable. As our public servants once again come before the American people, asking for our votes, it is important that they know that we will hold them accountable for their actions.
Posted by NO BORDER WALL at 9:46 AM 1 comment:

The following press release comes from the Center for Biological Diversity, regarding the impact of the border wall on flooding in Organ Pipe National Monument on July 12. The same storm system that caused flooding in Nogales, Sonora, Mexico, which was dramatically worsened by the presence of the border wall that runs through the sister cities of Nogales as well as an illegally built wall in the storm sewer beneath the cities, was responsible for the flooding of the washes in Organ Pipe. This is a regular occurrence that the Department of Homeland Security had been warned of, but apparently Chertoff did not heed those warnings.

PHOENIX— A newly obtained National Park Service report details ecological and infrastructure damage in Organ Pipe Cactus National Monument caused by flood obstruction and debris accumulation along recently constructed portions of the border wall. Damage includes severe erosion, infrastructure damage, and movement of floodwaters and drainages behind debris obstructions into adjacent deserts and, in one case, through a border-crossing station.

An environmental analysis conducted by the Department of Homeland Security in 2007 concluded that the fence would “…not impede the natural flow of water.” It would be “…designed and constructed to ensure proper conveyance of floodwaters and to eliminate the potential to cause backwater flooding on either side of the U.S.-Mexico border.” Further, Customs and Border Protection would “…remove debris from the fence within washes/arroyos immediately after rain events to ensure that no backwater flooding occurs.” Homeland Security Secretary Michael Chertoff has since exempted the border wall from all environmental laws.

“The callousness displayed by Homeland Security in ignoring warnings to damage a national treasure is mind-boggling,” said Robin Silver of the Center for Biological Diversity. “The border wall does not stop humans, but it will stop jaguars and other wildlife. It is already wreaking havoc on the southern part of Organ Pipe National Monument.”

Accelerated scour below the pedestrian fence will damage the structural integrity of the vehicle barrier along the U.S./Mexico boundary unless continued maintenance occurs.

Floodwaters will flow laterally along the pedestrian fence and on the patrol road. These flows will result in erosion and scour above and below the foundation wall of the fence, including areas hundreds of feet outside existing drainage channels. As a consequence, the need for routine maintenance and repairs of the patrol road and vehicle barrier will increase.

The patrol road associated with the pedestrian fence will change vegetation in Organ Pipe by changing rainfall retention or runoff along the northern road edge.

Riparian vegetation will change in response to increased sedimentation.

Channel morphology and floodplain function will change over time.

Channelized waters will begin a gullying process that has the potential to transform land surfaces in the affected watersheds.

“While the Bush administration may claim it’s taking environmental impacts of the border wall into consideration, building wire mesh fences across washes prone to debris-laden floods is fundamentally flawed,” said Silver. “It’s time for Homeland Security to lift its embargo on environmental laws. The border fence does not stop humans. Now we have more proof of the wall’s destruction of our national treasures."

On July 12, monsoons washed through the Nogales, Sonora area and caused major flooding on the Mexican side of the border. In some places five feet of water was pooled up along the border wall and there were reports of cars floating away. What caused this flood? 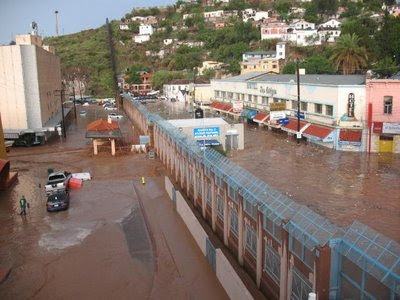 As reported in the AZ Daily Star, Mexican officials blame an illegally built wall for the devastating flood. The Border Patrol built a 5 foot wall within a drainage tunnel near a port of entry without notifying the International Boundary and Water Commission (IBWC).

The IBWC is comprised of officials from Mexico and the U.S. They are charged with seeking solutions to issues pertaining to sanitation, water quality, and flood control in the border region. The 5 foot wall was built by Border Patrol in January of this year. Traditionally, the IBWC is consulted when projects built on either side of the border will have an impact on stormwater runoff. However, Border Patrol never contacted the IBWC.

Mexican officials with the IBWC have submitted a formal complaint claiming that the wall reduced water flows within the drainage tunnel. As a result, concrete drainage structures failed and released torrents of water into the streets of the Nogales, Sonora. U.S. officials are still investigating the matter.

Complete disregard for the law and respect for other agencies and communities within the border region is now rampant within the Department for Homeland Security (DHS). This year DHS waived over 30 federal laws in order to construct hundreds of miles of border walls. Now the Border Patrol has failed to consult with the organization responsible for bi-national flood control and has endangered the residents of Nogales.

We know that border infrastructure is having devastating impacts on wildlife and ecosystems. The Nogales flood shows us that border communities also face environmental injustices. The flood caused millions of dollars in damages and destroyed many businesses in a low income community. Floods such as this can soil drinking water, spread hazardous materials, and create breeding grounds for various types of mold that can pose a health risk to people.


The infrastructure being utilized by DHS along the U.S./Mexico border continues to result in devastating impacts not only to the natural environment, but to communities as well. The Nogales flood could very well be a portent of what could occur along the lower Rio Grande Valley. There are many communities in the vicinity of the walls being constructed along that stretch of the border. This incident is yet another tarnished example of how U.S. border policy fails and instead places people and the environment at risk.

Sean Sullivan is the Co-Chair for the Sierra Club's Rincon Group in southern Arizona.
Posted by NO BORDER WALL at 2:51 PM 1 comment: