If the Border Patrol knocks on your door you might want to have a lawyer present when you answer.

That is because Customs and Border Protection is gearing up for a fresh round of land condemnations to build border walls in Roma, Rio Grande City, and Los Ebanos.

According to documents obtained by the Sierra Club through a Freedom of Information Act request the new walls won’t just slice through farmland and wildlife refuges.  In Roma “up to 25 residences could be impacted.”  In Rio Grande City the wall’s route will take it through a nursing home, and “If the decision is made to buy the tract out in its entirety, the business will need to be relocated along with 64 residents, potentially up to 90 residents if at 100% capacity.”  In Los Ebanos landowners who went through condemnation three years ago will be hauled into court again to have more of their property snatched away.

This new assault on border communities is the result of the US section of the International Boundary Water Commission’s (US IBWC) decision to allow border walls to go up in the Rio Grande floodplain.

When they were first proposed, along with the rest of South Texas’ border walls, US IBWC stated categorically that walls could not be erected in the floodplain because they posed an unacceptable flood risk to communities on both sides of the river.  Walls north of the river might deflect rising flood waters, worsening the damage to Mexican cities and possibly even pushing the river into a new channel, thereby changing the location of the international border.  For this reason walls in Cameron County were erected north of the flood control levees, and in Hidalgo County there were inserted into them. 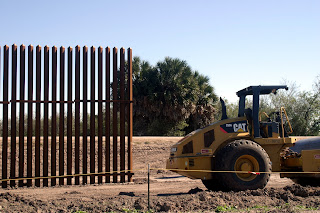 The new walls will be identical to those built in Cameron County, using six inch wide steel posts that stand eighteen feet tall with four inch spaces in between.  In 2008 Baker Engineering looked at the impacts of this design placed in these locations, and estimated that during a flood the walls would clog with debris, limiting the ability of water to pass between the pillars.  In Roma they estimated an 85% blockage where the walls paralleled the river’s flow; in Rio Grande City a 67% blockage; and in Los Ebanos a 36% blockage.  Where the walls would be erected perpendicular to the flow Baker said CBP should assume that debris would cause the walls to be completely blocked.

In 2011 Customs and Border Protection paid Baker to look at the same wall design placed in the same location, and with no new evidence or explanation they came to a radically different conclusion.  Now “A debris blockage of 10% was adopted where the fence is aligned parallel to the flow and 25% at locations where the fence is aligned perpendicular to the flow.”  Not surprisingly the model that this new estimate was plugged into concluded that walls in the floodplain would not deflect or dam flood water, since 75 -90% of the water would supposedly pass right through. 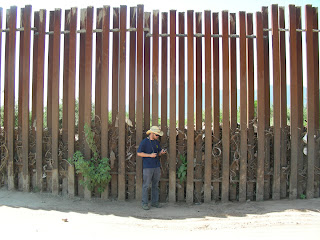 The US section of IBWC accepted this without question.  The Mexican section categorically rejected it.

One would think that a bi-national organization would require agreement before permitting potentially dangerous projects.  Instead, the new border walls are going up.

In a presentation dated March 1, 2013, Customs and Border Protection laid out a timeline for the construction of these new walls:

Initiate new acquisitions of property, through purchase or condemnation:  180 days.

So if you have property in the path of these walls, now is the time to call a lawyer.

And those lawyers are going to be very busy.  The “gang of eight” immigration bill includes $1.5 billion for new border walls.

When Congress passed the Secure Fence Act in 2006 Customs and Border Protection walled off big portions of California, Arizona, and New Mexico.  There aren’t too many places outside of inaccessible mountains without walls up there.  What’s left is Texas.

Unless the bill is changed and the walls are taken out Customs and Border Protection will start filling in the unwalled spaces between South Texas’ existing border walls.  The Lower Rio Grande Valley National Wildlife Refuge, and the endangered species that it protects, will be utterly decimated.  And every other landowner with property along the Rio Grande from Roma to Boca Chica will stand in turn before a federal judge, before watching construction crews wall off their land from the river.

Some, like the 25 households in Roma or the senior citizens in Rio Grande City, may even see the their homes fall to these new border walls.
Posted by NO BORDER WALL at 11:07 PM No comments:

Border Residents Kept in the Dark about New Border Walls

Four members of the Senate’s “Gang of Eight,” the group charged with crafting comprehensive immigration reform legislation, recently paid a visit to the border wall that separates Nogales, Arizona from Nogales, Sonora.


The trip was little more than a photo-op.  The senators did not meet with locals or hear from others who live on the border, who experience border security daily and will be directly impacted by any border security measures in the coming bill.  But their pilgrimage to the wall did send a message that their bill is likely to be heavy on enforcement, possibly including hundreds of miles of new border walls.


Senator McCain (R-AZ) led the tour, and he chose a striking location to give Senator Schumer (D-NY) his first glimpse of the border wall.


Maybe he just wanted to show off the nearby section of wall that he used as a backdrop for his “Complete the Danged Fence” campaign ad.


It is a safe bet that he did not take his colleagues to the spot, a few hundred yards from where they posed for the press, where last October a Border Patrol agent reached through the wall to shoot an unarmed teenager in Mexico 11 times in the back.  He probably also failed to point out the high water mark left on Mexican buildings when, in 2008, the Nogales border wall dammed floodwaters, causing millions of dollars in property damage and the drowning of two men. 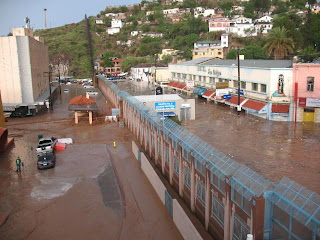 Of course those events don’t fit the simple narrative of McCain’s “perfect plan” for border security that he outlined in his TV ad.  Better to stare into the camera and ignore inconvenient facts, then and now.


Senator Schumer likely sees more “danged fence” as the cost of immigration reform, the burden that border communities will have to bear to bring undocumented immigrants out of the shadows.  That was also the idea in 2006, when the Congressional push for immigration reform fell apart and all we were left with was the Secure Fence Act and hundreds of miles of border wall.


As the “Gang of Eight” has been horse-trading behind closed doors Customs and Border Protection has been quietly laying the groundwork for the last of the Secure Fence Act’s walls to go up in Roma, Rio Grande City, and Los Ebanos, along with neighboring farms and the Lower Rio Grande Valley National Wildlife Refuge.


Customs and Border Protection wants to build these walls in the floodplain, but over the years the International Boundary and Water Commission repeatedly rejected them, citing “substantial increases in water surface elevations and deflections of flow at several points of all three projects.”  Were the Rio Grande to flood after a hurricane or tropical depression, as it did in 2010, walls in the floodplain would deflect water into Mexican cities like Ciudad Aleman, and would stop water from draining out of communities such as Rio Grande City. 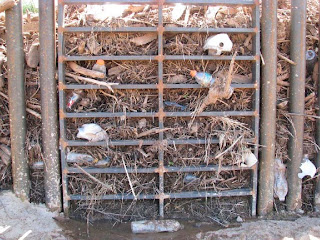 Last year, after sustained pressure from Customs and Border Protection, the US section of the International Boundary and Water Commission reversed its decision, rejecting the Mexican section’s objections and allowing these dangerous walls to go forward.  They now officially accept the claim that the border wall will allow flood water to pass harmlessly through, even though in 2008 they forced Customs and Border Protection to build walls in Cameron County of the exact same design north of the levees so that they would be out of the floodplain.


Homes and businesses, farms and wildlife refuges, could be washed away or inundated by floodwaters as a direct result of these walls.


Customs and Border Protection says that everything will be fine.  Of course they also said that they would pay to mitigate the damage that previous wall construction inflicted upon the Lower Rio Grande Valley National Wildlife refuge, but after years of promises not a penny has been provided.


Just like the “Gang of Eight” on their trip to Nogales, Customs and Border Protection has made no attempt to talk to residents or local officials in the Texas communities that the new walls will tear through.


I contacted Customs and Border Protection last week and asked for an update regarding the Starr county walls.  Daniel Tirado, with the RGV Sector Public Affairs Office, responded that, "the Office of Border Patrol identified these segments as highest operational priorities in Texas. Though construction of these segments has been delayed, Border Patrol’s requirement remains.”


The assertion that these walls, or any border walls for that matter, are a high operational priority is absurd.  Customs and Border Protection knows better than to think that border walls stop anyone.


While the Senators were doing their press junket in Nogales they watched as a woman laid a ladder against the 18-foot wall and quickly climbed over.  Senator McCain even tweeted about it as it happened. 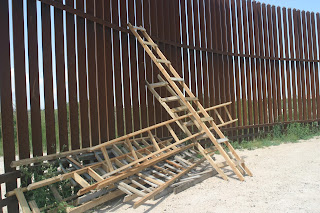 Visiting Arizona last summer I easily climbed the border wall in the San Pedro Riparian National Conservation Area.  I was wearing sandals and didn’t have a ladder, but it only took a few seconds to reach the top.  The San Pedro wall is identical to the ones planned for Roma, Rio Grande City, and Los Ebanos.
These new walls will go up in Representative Cuellar’s district, and his silence regarding them has been even more striking, and surprising, than Customs and Border Protection’s.  He has not held any town hall meetings to get feedback from, or provide information to, effected communities, and he has not publicly criticized Customs and Border Protection’s plans or their refusal to speak with local residents.


When I asked his office if he had taken any action on behalf of his constituents, he responded,


“I initiated a formal inquiry with CBP as a follow up and update on the status of the proposed fence. CBP has advised that there are no plans for building additional fences in FY 2013 due to the lack of funding.”


Customs and Border Protection also told me that, “Construction activities will commence at such time as funds become available.”


Which sounds good.  Until Congress provides funds for border walls maybe residents can relax.  One might expect that with the sequester gutting the budgets of federal agencies and forcing furloughs from the Environmental Protection Agency to air traffic controllers money for border walls won’t come any time soon.


But tucked into the spending bill that Congress just passed to keep the government running is a provision that says,


Existing border walls are very expensive to maintain, so not all of that money is available to build new ones.  But Customs and Border Protection condemned the land and bought the steel for these walls years ago.  All that is left is to hire the crews, gas up the bulldozers, and start tearing up the land.


And if the “Gang of Eight” includes hundreds of miles of new border walls in comprehensive immigration reform, instead of passing a clean bill that focuses strictly on immigration instead of multi-million dollar handouts to government contractors, the rest of the border landowners and wildlife refuge tracts in Congressman Cuellar’s district will likely suffer the same fate as Roma, Rio Grande City, and Los Ebanos.
Posted by NO BORDER WALL at 10:00 AM No comments: