In a Congress plagued by immigration hysteria, none is more gravely afflicted than South Carolina’s Republican Senator Jim DeMint. Twice in two weeks he added border pork to Senate bills, both times calling for 300-plus miles of walls to be imposed between the U.S. and Mexico. These are the fourth and fifth times in less than two years that he has made such attempts.

Delirious and angry lawmakers like DeMint seem oblivious to the 650 miles of barriers and walls that already occupy the Southwest’s borderlands, exacting high costs on taxpayers and public lands. Another side effect these lawmakers suffer is an acute indifference to the impacts caused by their border madness.

A new study in the Diversity and Distributions journal identifies 49 species put most at risk by border walls and areas of intensive human land use along the U.S.-Mexico border. The study only considers amphibian, reptile, and non-volant (don't fly) mammal species, and identifies California, the Sky Islands, the Gulf Coast as the three regions most heavily impacted.

One unique aspect of this study is that it doesn’t just look at current impacts wrought by existing border walls and areas with a heavy human footprint. Potential future impacts from border wall expansions such as those proposed by DeMint are also taken into consideration, and the results are sobering:

This graph from the study shows a horizontal base line representing our 2,000 mile border with Mexico. The three faint vertical lines in the left half of the graph represent the state borders between California, Arizona, New Mexico, and Texas. The fatter horizontal line sitting atop the baseline shows where the taller “pedestrian” (10-25 feet tall) border walls are located along the border.

Then there is the vertical ‘species’ scale, which includes only species from the sample set that have already been listed as threatened, either binationally or by the International Union for the Conservation of Nature. The dashed line represents how many of these already-threatened species are put in grave danger by existing “pedestrian” border walls in each geographic location along the border. You’ll notice that there are few such species, which may be expected when working with such a small sample set of species to begin with.

However, the solid line is much less benign, with the number of vulnerable species spiking most dramatically here in Arizona (to the right [East] of first faint vertical line [CA-AZ border]). This line represents the number of already threatened species that would be pushed to the brink if proposals like DeMint’s were passed and border walls came to occupy even more precious habitat. 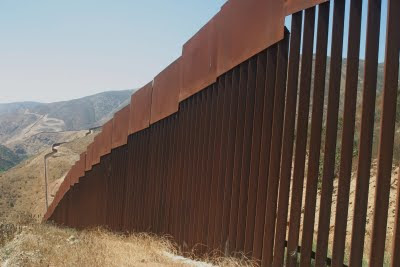 A key finding of the study states, "The REAL ID Act should be amended to reinstate environmental regulation of border security efforts." The REAL ID waiver of more than 30 vital federal protection laws along the border allowed walls to be built in violation of the Wilderness Act, the Endangered Species Act, and more.

Posted by NO BORDER WALL at 3:25 PM No comments:

Our Worst Fears about the Border Wall Come True

More human beings would die alone in remote deserts. Endangered species would be pushed to the brink. These were the fears that led humanitarians, environmentalists, and border residents to object to the walls along the U.S.-Mexico border called for by the Secure Fence Act of 2006. With 650 miles built, this summer has brought news that these fears are tragically coming true.

The journey taken by migrant men, women and children who set out across the U.S.-Mexico border has always been risky. But border walls have rerouted migrants away from the safety of urban areas and forced them to walk for greater distances over treacherous mountains and through searing deserts. All too easily they can become fatigued, dehydrated, and unable to go on. In too many cases, they die alone in remote areas.

This month an Arizona Daily Star analysis found that migrants today are almost three times more likely to die on their journey than people who crossed in 2006, the year before the walls began to go up. In fact, the rate of death—the number of deaths per 100,000 Border Patrol apprehensions—continues to increase even as fewer people are making the trek across the border.

Before the walls, in 2006, there were just 46 known deaths per 100,000 Border Patrol apprehensions. By 2010 the number had jumped to 118 known deaths per 100,000 apprehensions, and so far 2011 already has a death rate of 129 per 100,000.
These human beings are also dying deeper in the desert and much further from roads than ever before. Because of the remoteness of the areas in which they die, many of the bodies discovered are just skeletal remains. Such are the real and tragic consequences of border walls.

The same walls that are pushing crossers deeper into deadly terrain slice though nature preserves that were established to protect endangered species. The Otay Mountain Wilderness Area, Organ Pipe Cactus National Monument, and Lower Rio Grande Valley National Wildlife Refuge have seen critical wildlife habitat divided by walls. Environmentalists have argued that vulnerable species like the ocelot, whose U.S. population is less than 100 individuals in South Texas, would be walled off and trapped in small fragments of habitat. Without sufficient food, water, and potential mates, the population would dwindle.

Now scientists are beginning to uncover just how extensive the wall’s impacts are likely to be on endangered species. A recent article published in the journal Diversity and Distributions found that border walls impact 23 endangered species border-wide. Some species in California are blocked from as much as 75 percent of their ranges, a circumstance that makes the isolated populations extremely vulnerable to disease or natural disasters. The study also found that in South Texas border walls impact between 60 percent and 70 percent of the habitat set aside for endangered ocelots in the Lower Rio Grande Valley National Wildlife Refuge.

In 2008 the Department of Homeland Security (DHS) recognized that the border wall had damaged wildlife refuges along the border, and Congress appropriated $50 million to mitigate the effects of the wall border-wide. Money was promised to the Lower Rio Grande Valley National Wildlife Refuge to purchase land to replace the ocelot habitat that the border walls fragmented. But after DHS withheld the money for years, Congress took back the funds. DHS has no further plans to fix any of the environmental damage that its border walls have caused.

As predicted, the border wall has exacerbated the ongoing humanitarian crisis of migrant deaths and has devastated the environment. Nevertheless, some in Congress are calling for more walls and looking to strip border communities of their environmental protections under the pretense of border security.

Dan Millis has witnessed first-hand the human tragedy and environmental devastation unfolding daily along the U.S.-Mexico border. Shortly after finding the lifeless body of a young girl along a migrant trail in Arizona, Dan was convicted of littering for leaving bottles of clean water along trails in the same area. He now works for the Sierra Club in Tucson fighting on behalf of the people and places victimized by border walls and enforcement-only politics.

Dan will visit Texas' Rio Grande Valley to share his experiences, and discuss the impacts of flawed U.S. border policy and how you can make a difference on Monday evening, August 22nd at 7:00 pm at Galeria 409 in Brownsville and on Tuesday August 23rd at 7:00 pm at St. John the Baptist Parish Hall in San Juan. For more information and directions, visit valleygreenspace.wordpress.com.

As border residents we need to educate ourselves about the terrible consequences of border walls and enforcement-only policies all along the border, and then inform our elected leaders.

Posted by NO BORDER WALL at 8:59 PM No comments: