Walling Off Our Southern Deserts

Over 660 miles of border wall have been built along the U.S.-Mexico border, slicing through the deserts of California and Arizona on its route from the Pacific Ocean to the Gulf of Mexico. The wall’s path takes it through some of our nation’s most fragile and biologically diverse protected lands. Border wall construction has involved dynamiting mountains and damming rivers, the disruption of migration corridors and the destruction of endangered species habitat. 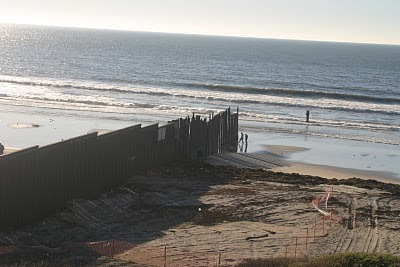 Border wall on the beach between San Diego and Tijuana.

In 2004 the California Coastal Commission determined that border walls south of San Diego would have a devastating impact on the Tijuana Estuary, in violation of the Coastal Zone Management Act. Environmental groups, including the Sierra Club, sued to stop the Border Patrol’s plan to plug several canyons in order to create a level path for the border wall. The court found that the Border Patrol was in violation of federal environmental laws, and construction ground to a halt.

Rather than insist that Border Patrol obey our nation’s environmental laws, Congress passed the Real ID Act. Section 102 of the act was intended to overrule the objections of the California Coastal Commission and the Sierra Club by allowing the Secretary of Homeland Security to waive any law that border wall construction might otherwise violate. No one else, including the President, is granted this power. Former Homeland Secretary Chertoff used the Real ID Act five times, to set aside 36 federal laws and, “all federal, state, or other laws, regulations and legal requirements of, deriving from, or related to the subject of” those laws. The waivers encompass the broad subjects of water, air, wildlife, and the environment, leaving few, if any, environmental laws in place. 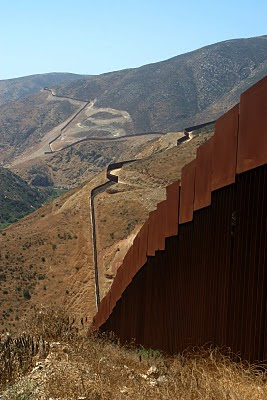 A few miles east of the border wall’s start in the Pacific Ocean, the Otay Mountain Wilderness Area protects the last surviving stands of Tecate cypress, an ice age tree that survives by absorbing coastal moisture from the air. This tree in turn is the host plant for the rare Thorne’s hairstreak butterfly. When the Environmental Protection Agency (EPA) reviewed the plan to build border walls through the Otay Mountain Wilderness Area, they expressed concern that filling in canyons and waterways that feed the Tijuana River would violate the Clean Water Act. The Department of the Interior (DOI) warned that 6 endangered species would also be harmed by the wall.

San Diego Sector Border Patrol spokesman Richard Kite said of the Wilderness Area, "At the mountain range, you simply don't need a fence. It's such harsh terrain it's difficult to walk, let alone drive. There's no reason to disrupt the land when the land itself is a physical barrier."

By 2008, this logic no longer held sway at DHS and, ignoring the concerns of the EPA and DOI, the Department of Homeland Security (DHS) decided to “disrupt the land” of the Otay Mountain Wilderness Area with a border wall and a patrol road. The rugged terrain necessitated the blasting of 530,000 cubic yards of rock and extensive grading and leveling. Border wall construction caused tremendous erosion, and involved cutting down more than 100 Tecate cypress trees.

Because dynamiting mountains is clearly incompatible with a wilderness designation, Secretary Chertoff used the Real ID Act to waive the Otay Mountain Wilderness Act. He also swept aside the Clean Water Act and the Endangered Species Act. The Otay Mountain Wilderness Area now suffers from a barren scar and erosion that will bleed sediment into the Tijuana River for years to come. 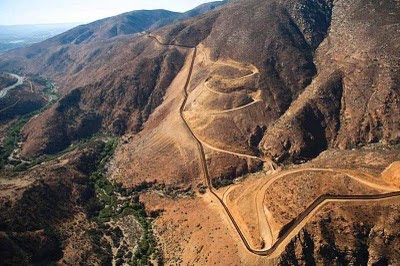 Further east, Arizona’s San Pedro River is one of the last undammed, free-flowing rivers in the American Southwest. It anchors one of the most biologically diverse areas in the United States, at the convergence of four major ecosystems: the Sierra Madre and Rocky Mountains, and the Sonoran and Chihuahan Deserts. The San Pedro Riparian National Conservation Area was designated by the National Audubon Society as its first Globally Important Bird Area, and by the United Nations World Heritage Program as a World Heritage Natural Area.

When the DHS announced that it would put a wall across the San Pedro, the Sierra Club and Defenders of Wildlife sued. A federal court agreed that the federal government’s failure to fully assess the environmental impacts of the border wall violated the National Environmental Policy Act (NEPA), and ordered a temporary halt to construction. Rather than comply with NEPA, former DHS Secretary Chertoff used the Real ID Act to waive it. Border walls built in the San Pedro watershed are now causing erosion and damming that will permanently alter the riparian habitat.

The border wall’s impact on the flow of water in desert ecosystems was made clear in 2008, when the Organ Pipe Cactus National Monument received seasonal monsoon rains that resulted in the flooding of a number of washes that were blocked by the border wall. Grates built into the base of the wall to allow for the passage of water quickly choked with debris and sediment. The wall then acted as a dam, with water up to seven feet deep piling up behind it. Floodwaters then travelled laterally along the wall until they found an outlet at the Sonoyta port of entry, causing millions of dollars of damage to private businesses and government buildings there.

The border walls and patrol roads that slice through hundreds of miles of public and protected lands also fragment the habitats of a number of endangered species, including the Sonoran pronghorn, cactus ferruginous pygmy owl, and desert tortoise. Cut off from their usual range, populations may not have access to mates in other groups, a necessity for a genetically diverse, healthy population. Border walls also separate animals from food and water sources, leaving them especially vulnerable in times of drought. With the endangered species act waived, these threats to species’ survival have been largely ignored. 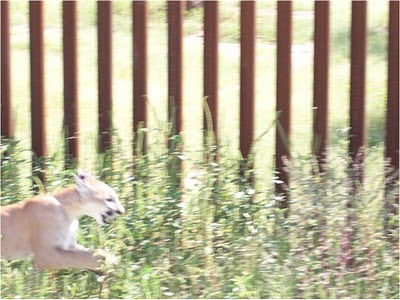 A mountain lion runs alongside the border wall.

The lands of the Tohono O'odham, whose name means “the desert people,” were once vast, extending from what is now Central Arizona down into Sonora, Mexico, and from the Gulf of California east to the San Pedro River. The international border splits their land, and the erection of the border wall has restricted their ability to visit family and sacred sites and to collect traditional foods and other materials.

Speaking before a U.S. House of Representatives hearing on the border wall, Tohono O’odham Chairman Ned Norris Jr. said, “… fragments of human remains were observed in the tire tracks of heavy construction equipment. Imagine a bulldozer parking in your family graveyard, turning up bones. This is our reality.”

DHS claims that border walls are actually good for the environment because border crossers leave litter, make foot paths, and, in the states that do not have a river for a border, drive off road vehicles through sensitive habitat. This assertion is based on a pair of false premises. The first is that border walls stop crossers. They do not. The Congressional Research Service found that border walls have “no discernible impact” on the number of undocumented immigrants who enter the United States each year. Instead, walls redirect many of those who seek to enter on foot, “funneling” them into more remote areas. This often means that their environmental impacts are concentrated in fragile desert ecosystems, rather than closer to walled off border towns. “Funneling” has contributed to the deaths of more than 5,600 crossers in the harsh Arizona desert.

The second false premise is that border walls and patrol roads are less damaging to ecosystems than border crossers. The border wall’s destructive impact is made obvious by the Department of Homeland Security’s need to “waive in their entirety” our nation’s most important environmental laws. The only reason for DHS to waive laws is that border walls violate them. Litter and migrant trails can be a problem for wildlife, but the blasting, bulldozing, habitat fragmentation, and large-scale erosion caused by border walls and roads are worse by magnitudes of scale.

Ignoring the useless and destructive nature of border walls, political hopefuls from Alaska to Kansas, Utah to Rhode Island, called for more walls in the run up to the mid-term elections. This is not just empty rhetoric that can be ignored. A number of amendments requiring the erection of hundreds of miles of new wall were introduced in the last Congress, and one, authored by Jim DeMint of South Carolina, passed in the Senate before being stripped in a House/Senate conference committee.

Representative Ciro Rodriguez, whose district already has border walls, blocked DeMint’s amendment. Rep. Rodriguez lost his reelection bid, and the U.S. House lurched to the right. Key committees that oversee immigration and homeland security will soon be chaired by Representatives who have long advocated further militarizing the border. DeMint and others will likely redouble their efforts to build more border walls, and their legislation will stand a much better chance of making it onto the President’s desk.

Instead of building more border walls, Congress should focus on mitigating the damage that has already been inflicted. It is also critically important that Congress repeal the Real ID Act’s waiver provision. The Real ID Act is not only a threat to border ecosystems should Congress require more walls, it also establishes the precedent that bedrock environmental laws such as the Endangered Species Act and Clean Water Act can be swept aside when obeying them would be inconvenient. For these reasons the Sierra Club and other environmental organizations oppose further border wall construction, and call upon Congress to repeal of section 102 of the Real ID Act.


This originally appeared in the Desert Report, a quarterly publication of the Sierra Club's California / Nevada Desert Committee: http://www.desertreport.org/wp-content/uploads/2010/12/DR_Winter2010.pdf
Posted by NO BORDER WALL at 6:02 PM 2 comments: