Border Walls are Ineffective Speed Bumps in the Desert

All of the imagined benefits of the border wall flow from the assumption that if walls are built they will stop undocumented traffic from coming across. Politicians claim that building 700 miles of wall along our 1,933 mile long southern border, while ignoring the 3,987 mile long northern border and 12,479 miles of coastline will somehow allow the Department of Homeland Security to achieve the Secure Fence Act’s goal, to “achieve and maintain operational control over the entire international land and maritime borders of the United States.”

In fact, the Border Patrol’s own statistics show that the border walls have not brought about a decrease in illegal entries. The border patrol uses the number of border crossers apprehended in a given sector to gauge the overall number of attempted crossings. Apprehensions dropped dramatically between 2005, the year before the Secure Fence Act was passed, and 2007, the year after. But the decrease did not occur in areas where border walls had been built. On the contrary, the greatest reductions in apprehensions, which according to the Border Patrol would indicate a successful strategy for stopping undocumented immigration, were seen in sectors that did not have walls. Texas’ Rio Grande Valley sector saw a 45.3% decrease in apprehensions, bringing them to a 15 year low. The Del Rio, Texas, sector saw a 66.5% decrease. Neither sector had an inch of border wall before 2008. In sectors such as Tucson, which saw walls built shortly after passage of the Secure Fence Act, the reduction in apprehensions began before any wall posts were erected. The areas that saw an increase in crossings were California’s San Diego and El Centro sectors, both of which have had border walls for over a decade. At the same time that the unwalled border witnessed dramatic decreases in crossings, heavily fortified San Diego saw a 20.1% increase.

Even before the passage of the Secure Fence Act, it was clear that border walls did not reduce the number of people entering the United States. The Congressional Research Service found that the number of border crossers apprehended nationally in 1992 was the same as the number apprehended in 2004, after walls in San Diego had been erected. They concluded that migrant traffic had simply shifted to more remote areas in Arizona and that “increased enforcement in San Diego sector has had little impact on overall apprehensions.” Migrants were not stopped by border walls; they simply went around them.

Other researchers have studied the effectiveness of the border wall and border enforcement by analyzing how successful migrants are at getting through it. The Migrant Policy Institute found that 97% of undocumented immigrants eventually succeed in entering the United States, a number that has been unchanged since the first border walls went up in 1995. Wayne Cornelius, Director of the Center for Comparative Immigration Studies at the University of California-San Diego told the House Judiciary Committee that according to his research,

Tightened border enforcement since 1993 has not stopped nor even discouraged unauthorized migrants from entering the United States. Even if apprehended, the vast majority (92-97%) keep trying until they succeed. Neither the higher probability of being apprehended by the Border Patrol, nor the sharply increased danger of clandestine entry through deserts and mountainous terrain, has discouraged potential migrants from leaving home.

Assertions by pundits and politicians that walls will allow the U.S. to “secure” its southern border are patently false. Spokespersons for the Border Patrol tend to describe it much more modestly. Del Rio, Texas, Border Patrol Chief Randy Hill said, “We're going to see steel barriers erected on the borders where U.S. and Mexican cities adjoin. These will slow down illegal crossers by minutes.” Not stop crossers, or allow the Border Patrol to “achieve and maintain operational control” of the border, but slow them down by “minutes.” As Border Patrol spokesperson Mike Scioli said, “The border fence is a speed bump in the desert.”

Even Bush administration Secretary of Homeland Security Michael Chertoff said in 2007, “I think the fence has come to assume a certain kind of symbolic significance which should not obscure the fact that it is a much more complicated problem than putting up a fence which someone can climb over with a ladder or tunnel under with a shovel.”

Mile upon mile of border wall have been built, with no apparent thought given to efficacy, because the Secure Fence Act only mandated a mile count. There is no requirement that border walls have any measurable impact on immigration or smuggling, and in 2009 the Government Accountability Office found that the Department of Homeland Security had made no effort to determine whether or not walls were having any effect. Even the Border Patrol has questioned whether walls are being built in some locations for political, rather than operational, reasons. In a 2007 email obtained by the Center for Responsibility and Ethics in Washington (CREW) through a Freedom of Information Act request, the Assistant Chief Patrol Agent for the Yuma sector asks, “will we be getting fence where we don’t need it in our sector for the sake of putting up the required mileage?” The miles of unnecessary border wall that he referred to have since been built through the Imperial Sand Dunes of Southern California. 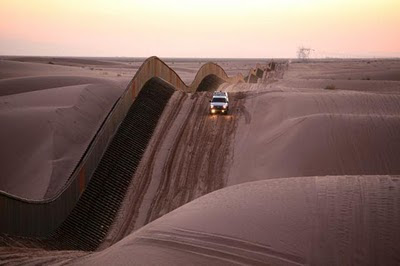 Despite its “symbolic significance” and its possibly arbitrary placement, the border wall comes with a real price tag. In 2007 the Congressional Research Service estimated that the border wall could cost as much as $49 billion to build and maintain. Since then the costs of construction have risen dramatically. The Army Corps of Engineers reported that the cost of building “pedestrian fences” has increased from an average of $3.5 million per mile to $7.5 million per mile. The cost of building vehicle barriers on the border is now $2.8 million per mile. Some sections of border wall are particularly expensive: the walls that have been inserted into the levees in south Texas averaged $12 million per mile; in California, a 3.5 mile section that involved filling in canyons cost taxpayers $57 million. In 2008, the Department of Homeland Security asked Congress to allocate an additional $400 million for border wall construction, because the $2.7 billion already spent was not enough to finish out the year.

Why would members of Congress vote to spend billions of taxpayer dollars on border walls that do not work?